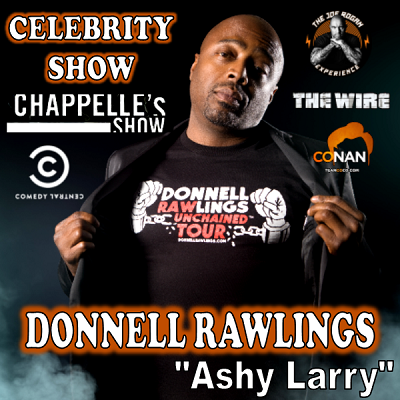 2018 has been a big year for Donnell, he is currently on his Funny Moves Tour. He can be seen starring in Kevin Smith’s Hollyweed. He was all featured on TBS’s The Last OG with Tracy Morgan.he was a hit at both The NY Comedy Festival and The Montreal Just for Laughs Comedy Festival and The JFL’s Toronto Comedy Festival. Featured projects include Project Dad starring Donnell and his son aired on TLC. It was a family-friendly series that follows 3 men that stay alone to take care of their kids. He was a hit on The Shaq Comedy All-Stars which will air on Showtime and he was cast in Kevin Smith’s pilot Hollyweed. In 2017 he killed during a record number of shows working with Dave Chappelle at Radio City Music Hall in NYC as well as DC. In 2016 Donnell was featured on Saturday Night Live in the famous Walking Dead sketch when Chappelle hosted. Donnell hosted his own show as Judge Rawlings on MTV2’s Guy Court. Donnell was also was a cast member on MTV2’s Guy Code. Donnell can be seen hosting Staann’ Dup to be seen on Starz in Black. He lends his voice in a recurring role as “Another Cat Named Rally” on the hit animation Black Dynamite as well being featured in Adult Swim’s animation. Donnell continues to tour heavily, performing his intelligently bold stand-up throughout the US, Europe, and the Caribbean.

Donnell is an overnight success a decade in the making. He made a splash in the DC comedy clubs going from a heckler in the audience to HBO’s Def Comedy Jam in a period of six months. You’ve seen him as ‘Ashy Larry’ on Comedy Central’s award winning and critically celebrated Chappelle’s Show, where he joined Dave Chappelle as both as a writer and performer. He was also featured in Queen Latifah’s new movie Percentage. His 1-Hour Stand-Up “Ashy to Classy” premiered on Comedy Central in October of 2010.

He was a co-host on both Power 105’s (NY’s #1 Hip Hop and R&B radio station) morning show “Egypt and Ashy in the Morning” and “The Big Tigger Morning Show” on WPGC in Washington DC, and he enjoyed weekly guest appearances on New York’s Hot 97 Morning Show. He was a regular on E!’s “Chelsea Lately”, starred in Comedy Central’s “Reality Bites Back,” and was the resident “Funny Guy” on the Ricki Lake Show. In 2007, Donnell co-created and starred in Heavy.com’s hit web series “From Ashy to Classy”, which was picked up for a second round of episodes. His movie of the same name screened at the 2011 L.A. Comedy Shorts Film Festival.

As an actor Donnell has also appeared in the Law & Order series, Special Victims Unit (SVU) and Criminal Intent (CI) as well as NBC’s Third Watch, the Emmy-Award winning HBO Mini-Series: The Corner and as Day-Day Price on HBO’s Emmy-Award winning series “The Wire.” On the big screen he could be seen in the blockbuster Spider-Man II.

His rise to stardom may not have been “overnight”, but the journey itself has kept him edgy and relevant. Comedy’s heavy hitters have noticed his talent with Neal Brennan, co- executive producer and co-head writer of Chappelle’s Show exclaiming “whenever we put Donnell in the game he’s going to hit a home run.” Jamie Foxx says, “That guy is a beast!” Wayne Brady commented that Donnell provides “amazing work on the show” and Dave Chappelle feels that “Donnell brings so much to the table…this very funny guy makes it look natural and easy.”