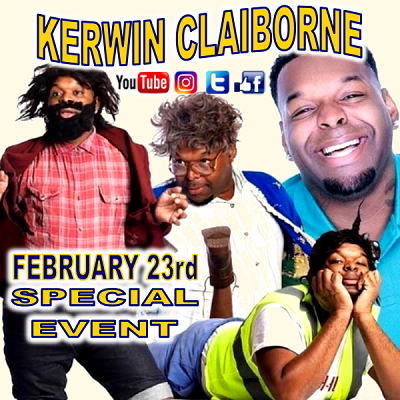 Over a Million Social Media followers can not get enough of comedian Kerwin Claiborne. This Southern comic is best known for his Social Media postings of a variety of short video skits and improvisations featuring very Southern characters. The cast of characters that he brings to the stage are truly outrageous and hilariously funny. This is absolutely one of the most original comedy shows you will see this year.

Kerwin first began sharing his comedic content to Instagram in February of 2016 and has been blowing up the internet ever since. He is known for performing at a variety of different comedy venues and theatres with a multitude of stars including at the Marvin Hunter & Friends show at the Vicksburg City Auditorium. He also hosted the First Friday show in Montgomery Alabama which featured Karlous Miller and more… His Instagram postings of pictures of his daughter are not to be overlooked. Don’t miss this one-of-a-kind One Night Only performance.