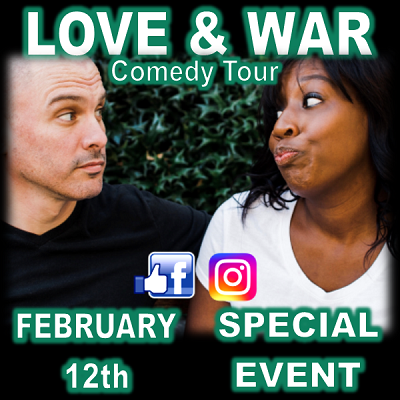 Comedic couple, Blayr Nias and Ryan Van Genderen take the stage together as the Love and War Comedy Tour, gingerly walking the thin line between love and hate. The gloves come off as this hilarious duo proves that love really is a battlefield; both comics taking aim at each other before the audience gets to shoot questions at them closing the show with a no holds barred interactive Q&A. It’s the show that asks, “What if Lucille Ball and Desi Arnez were broke millennials?” Touring and dating for years, their act is polished and perfectly off-the-cuff at the same time.

Blayr Nias, who has been seen on FOX’s “Laughs” and WCCB’s “News Rising”, is Charlotte Magazine and Creative Loafing’s “Best Comedian”. She has worked with comedic heavyweights like Gilbert Gottfried, Marc Maron, and Katt Williams.

Ryan Van Genderen, has been seen on Comedy Central’s Up Next and Funny Or Die’s Oddball Comedy Festival. He performs all over the country from colleges to casinos and has worked with comedy legends Aries Spears, Margaret Cho, and Bill Burr.