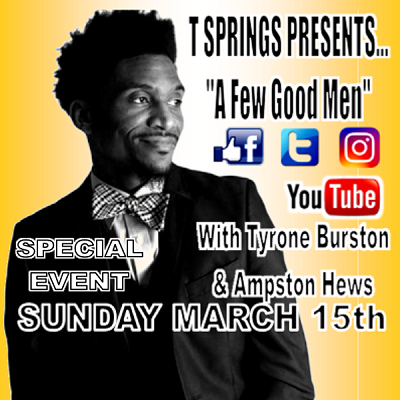 Trevor “TSprings” Springs is not a newcomer to the comedy world. His travels have taken him across the United States of America making crowds of people laugh. Whether an audience of one or 1000, TSprings’ quick whit yet swave persona has left him on comedy’s who’s who’s watch list.

A native of Kannapolis, North Carolina, (a small town north of Charlotte) he grew up finding ways to be seen and recognized. Standing, 5’6, TSprings had to figure out a way to stand out due to always being the shortest one in the group. One thing he was always able to do was make people laugh. He learned quickly that his ability to make people laugh would make them forget his height or small demeanor. Soon he became popular for being a people’s person and begin to make moves to monetize his situation.

TSprings has quickly earned a fanbase that is continuously growing. He’s performed on prestigious stages such as Caroline’s, Tommy T’s, Funny Bones and Improv’s across the nation. After watching him perform one could quickly surmise that this well dressed ball of fire will soon be making the world laugh. Right now, we will just enjoy his climb.